Who says climate skeptics swamp alarmists only in science. Now for enacting stunts, Greenpeace has competition. Our Lord Monckton of Brenchley's stunt grabbed all the media attention. But he was thrown out of the United Nations climate change talks in Doha last night.

In another wise drab affair that COP18 was, Lord Monckton injected the drama and humour that prompted the media to go gaga over him. 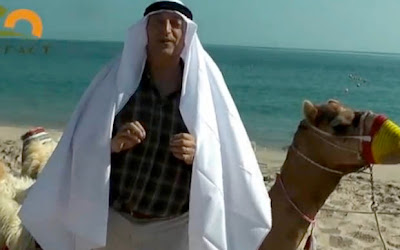 (The Telgraph) The hereditary peer, who is not a member of the House of Lords, took the chair of Myanmar and spoke into the microphone against UN climate change protocols. After a short speech, in which he was booed, he was escorted out of the meeting by UN guards.

"In the 16 years we have been coming to these events there has been no global warming at all."

He added: "Even if we were to take action to prevent global warming the cost would be many times greater than cost of making adaptive measures later. Our recommendation is that we should initiate very quickly a review of the science to make sure that we are all on the right track."

He has been banned for life from UN climate talks. Speaking afterwards, he said he was acting on the

"spur of the moment. I don't think it was my turn to talk, but the opportunity presented itself and I took it,” he said.  "I was very bad – I pressed the button and made a short statement...

"I know it was bad of me, but I got some brief points across which the delegates probably didn't expect. They have now taken my badge, but it's not the end of the world.

The UN said Lord Monckton was escorted out for

“violating the UN code of conduct" and "impersonating a party”.

He has been ‘de-badged’, meaning he no longer has a visa to stay in Qatar and had 24 hours to leave the country.  The former climate change adviser at UKIP, who tours the world speaking on global warming, said it was not a problem as he was flying out of the country that day.

Earlier in the week he appeared in a video promoted by US lobby group the Committee on a Constructive Tomorrow (CFACT) riding a camel to promote a "different perspective" of the talks.  The UN talks are in danger of collapsing as anger grows at the lack of progress towards a global deal to cut emissions.

Earlier in the day Lord Monckton gave a press conference in which he claimed that global warming is happening much more slowly than scientists predicted. He said that achieving targets to cut carbon emissions will be far more expensive than leaving the world to deal with the consequences of climate change.

Lord Monckton was heckled by a member of the small audience who left, shouting

Scientists predict that more than 2C of warming could cause devastation in small island states and vulnerable countries, as well as driving many species into extinction.

Posted by Rajan Alexander at 6:29 PM