COP18, Doha too ends without agreement: Talks on Climate Produce Promises and Complaints 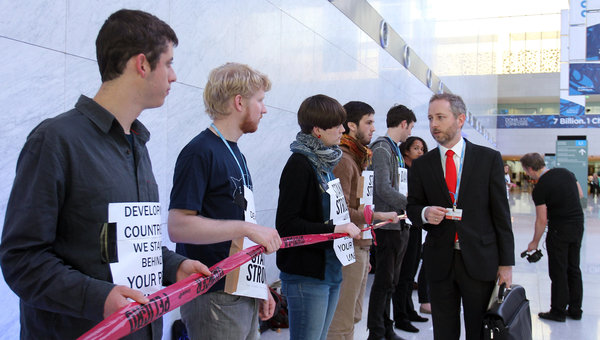 (NewYork Times) The annual United Nations climate change negotiations drew to a close here late Saturday after the customary all-night negotiating session and the recriminations over who should bear the costs and burdens of a warming planet.

Delegates from more than 190 nations agreed to extend the increasingly ineffective Kyoto Protocol for a few more years and to commit to more ambitious — but unspecified — actions to reduce emissions of climate-altering gases.

Wealthy nations put off for a year resolution of the dispute over providing billions of dollars in aid to countries most heavily affected by climate change. Industrial nations have pledged to secure $100 billion a year by 2020 in public and private financing to help poor countries cope with climate change, but have been vague about what they plan to do before then.

Only a handful of countries, not including the United States, have made concrete financial pledges for adaptation aid over the next few years.

The participants noted with “grave concern” the widening gap between what countries have promised to do to reduce emissions and the growing concentration of greenhouse gases in the atmosphere. The parties declared it unlikely that on the current path the world would be able to keep global temperatures from rising less than two degrees Celsius (3.6 degrees Fahrenheit) from pre-industrial times, a central goal of the United Nations process.

But the group left for future years any plan for addressing the mismatch between goals and reality, merely stating an intention to

“identify and explore in 2013 options for a range of actions to close the pre-2020 ambition gap.”

The accomplishments of this year’s meeting of the United Nations Framework Convention on Climate Change were modest, but so were its aims.

The meeting, formally known as the 18th Conference of the Parties, or COP 18, was always seen as a transition from the longstanding division of nations into industrialized perpetrators and developing-world victims of dangerous climate change. That division was enshrined in the Kyoto Protocol, which the United States never joined, which assigned pollution reduction targets to advanced nations but none to developing countries, including the world’s largest greenhouse gas emitter, China.

The parties agreed last year in Durban, South Africa, to work toward a new protocol or other legally binding instrument that would require actions of all parties, not just rich nations as under the Kyoto agreement of 1997. The new agreement is to be concluded by 2015 and enter into force in 2020.

The Doha meeting did not produce even the barest outline of what that new agreement would look like, leaving those questions for future meetings.

The convention addressed the relatively new concept of loss and damage, recognizing the increasing frequency of extreme weather events as well as slower-acting threats like drought and sea level rise. The body adopted language urging increased financial and technical support for the most vulnerable countries.

But it did not create a specific mechanism to handle such aid, angering some delegates.

“We are facing day in and day out the adverse effects of climate change,”

“Nobody is there to rescue them.”

In an interview with The Associated Press, Mr. Chowdjury cited the huge funding President Obama is seeking from Congress for Hurricane Sandy.

“But we won’t get that scale and magnitude of support,” he said.

It has long been clear that the United Nations talks were at best a partial solution to the planetary climate change problem, and at worst an expensive sideshow. The most effective actions to date have been taken at the national, state and local levels, with a number of countries adopting aggressive emissions reductions programs and using cap-and-trade programs or other means to help finance them.

While the United States has not adopted a comprehensive approach to climate change, the Obama administration has put in place a significant auto emissions reduction program and a plan to regulate carbon dioxide from new power plants. California has adopted a cap-and-trade system for 2013.

Other countries, including Korea, Australia and most of Europe, started earlier and have gone much further. It is those kinds of efforts that hold the most promise, at least in the short term, for controlling a problem that scientists say is growing worse faster than any of them predicted even a few years ago.

“What this meeting reinforced is that while this is an important forum, it is not the only one in which progress can and must be made,”

said Jennifer Haverkamp, director of the international climate programs at the Environmental Defense Fund and a veteran observer of these talks.

“The disconnect between the level of ambition the parties are showing here and what needs to happen to avoid dangerous climate change is profound.”

Posted by Rajan Alexander at 11:20 PM