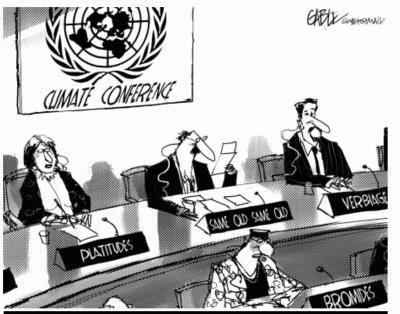 (Dr. Benny Peiser of The GWPF in WUWT) A couple of weeks ago the great global warming bandwagon coughed and spluttered to a halt in Doha, the latest stop on its never-ending world tour. The annual UN climate conference COP18 is no small affair. This is a bandwagon whose riders number in the thousands: motorcades of politicians, buses full of technocrats and policy wonks and jumbo-jets full of hippies travelling half way round the world, (ostensibly) to save the planet from the (allegedly) pressing problem of climate change  — Andrew Montford, The Spectator 9 December 2012

At the end of another lavishly-funded U.N. conference that yielded no progress on curbing greenhouse emissions, many of those most concerned about climate change are close to despair. –Barbara Lewis and Alister Doyle, Reuters, 9 December 2012

The United Nations climate talks in Doha went a full extra 24 hours and ended without increased cuts in fossil fuel emissions and without financial commitments between 2013 and 2015. However, this is a “historic” agreement, insisted Qatar’s Abdullah bin Hamad Al-Attiyah, the COP18 president. –Inter Press Service, 10 December 2012

The conference held in Qatar agreed to extend the emissions-limiting Kyoto Protocol, which would have run out within weeks. But Canada, Russia and Japan – where the protocol was signed 15 years ago – all abandoned the agreement. The United States never ratified it in the first place, and it excludes developing countries where emissions are growing most quickly. Delegates flew home from Doha without securing a single new pledge to cut pollution from a major emitter. –Barbara Lewis and Alister Doyle, Reuters, 9 December 2012

Climate negotiators at the most recent conference on global warming were unable to reduce expectations fast enough to match the collapse of their agenda. The only real winners here were the bureaucrats in the diplomacy industry for whom endless rounds of carbon spewing conferences with no agreement year after year mean jobs, jobs, jobs. The inexorable decline of the climate movement from its Pickett’s Charge at the Copenhagen summit continues. The global green lobby is more flummoxed than ever. These people and these methods couldn’t make a ham sandwich, much less save Planet Earth. –Walter Russell Mead, The American Interest, 9 December 2012 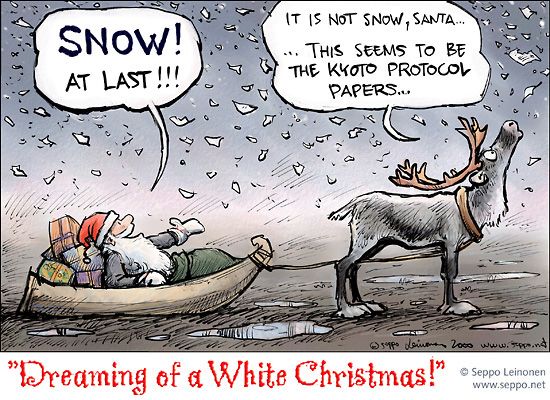 Britain faces even tougher green taxes if a climate change deal is signed in Doha that could force it to reduce emissions by another third. The country is signed up to a target to cut carbon emissions by 34 per cent by 2020, but this could go up to 42 per cent under a new United Nations deal. Experts last night warned that the new target could add hundreds of pounds to energy bills every year, and industry leaders said new carbon taxes would make British businesses less competitive. Benny Peiser, of Lord Lawson’s think tank the Global Warming Policy Foundation, said the cost to industry would be passed on to consumers.

“The more renewables you build, like wind, the more you need subsidies so it pushes energy bills up. If business has to pay higher bills the costs of products goes up.” –Louise Gray and Rowena Mason, The Daily Telegraph, 8 December 2012

The UN climate conferences have descended into ritual farce, as naked money-grabbing on behalf of poor countries contrasts with finagling impossible solutions to what is likely a much-exaggerated problem. One leading question is how dubious science, shoddy economics and tried-and-failed socialist policies have come to dominate the democratic process in so many countries for so long. The answer appears to be the skill with which a radical minority — centred in and promoted by the UN, and funded by national governments and, even more bizarrely, corporations — has skilfully manipulated the political process at every level. –Peter Foster, Financial Post, 7 December 2012

It’s green, it’s cheap and it’s plentiful! So why are opponents of shale gas making such a fuss? If it were not so serious there would be something ludicrous about the reaction of the green lobby to the discovery of big shale gas reserves in this country. Here we are in the fifth year of a downturn. We have pensioners battling fuel poverty. We have energy firms jacking up their prices. We have real worries about security of energy supply – a new building like the Shard needs four times as much juice as the entire town of Colchester. In their mad denunciations of fracking, the Greens and the eco-warriors betray the mindset of people who cannot bear a piece of unadulterated good news. –Boris Johnson, The Daily Telegraph, 10 December 2012