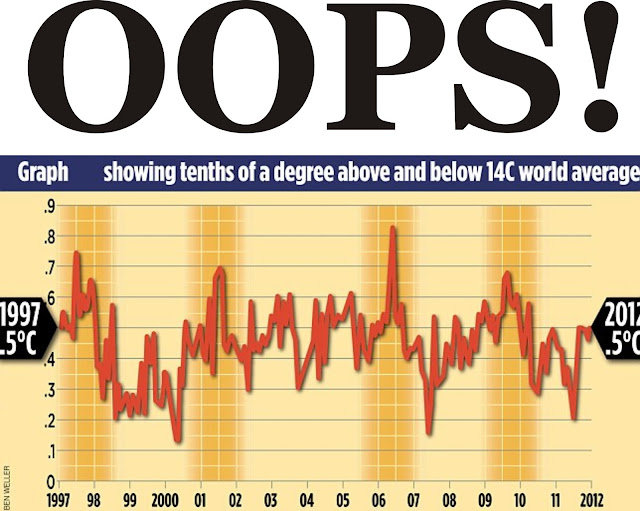 (Christopher Monckton in WUWT) Delegates at the 18th annual UN climate gabfest at the dismal, echoing Doha conference center – one of the least exotic locations chosen for these rebarbatively repetitive exercises in pointlessness – have an Oops! problem.

No, not the sand-flies. Not the questionable food. Not the near-record low attendance. The Oops! problem is this. For the past 16 of the 18-year series of annual hot-air sessions about hot air, the world’s hot air has not gotten hotter. There has been no global warming. At all. Zilch. Nada. Zip. Bupkis.

The equations of classical physics do not require the arrow of time to flow only forward. However, observation indicates this is what always happens. So tomorrow’s predicted warming that has not happened today cannot have caused yesterday’s superstorms, now, can it?

That means They can’t even get away with claiming that tropical storm Sandy and other recent extreme-weather happenings were All Our Fault. After more than a decade and a half without any global warming at all, one does not need to be a climate scientist to know that global warming cannot have been to blame.

Or, rather, one needs not to be a climate scientist. The wearisomely elaborate choreography of these yearly galah sessions has followed its usual course this time, with a spate of suspiciously-timed reports in the once-mainstream media solemnly recording that “Scientists Say” their predictions of doom are worse than ever. But the reports are no longer front-page news. The people have tuned out.

The Intergovernmental Panel on Climate Change (IPeCaC), the grim, supranational bureaucracy that makes up turgid, multi-thousand-page climate assessments every five years, has not even been invited to Doha. Oversight or calculated insult? It’s your call.

IPeCaC is about to churn out yet another futile tome. And how will its upcoming Fifth Assessment Report deal with the absence of global warming since a year after the Second Assessment report? Simple. The global-warming profiteers’ bible won’t mention it.

There will be absolutely nothing about the embarrassing 16-year global-warming stasis in the thousands of pages of the new report. Zilch. Nada. Zip. Bupkis.

Instead, the report will hilariously suggest that up to 1.4 Cº of the 0.6 Cº global warming observed in the past 60 years was manmade.

No, that is not a typesetting error. The new official meme will be that if it had not been for all those naughty emissions of carbon dioxide and other greenhouse gases the world would have gotten up to 0.8 Cº cooler since the 1950s. Yeah, right. 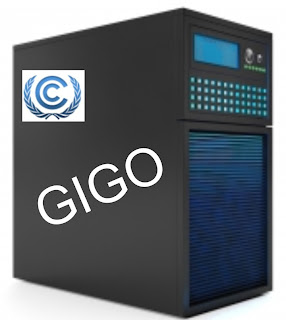 The smarter minds at the conference (all two of us) are beginning to ask what it was that the much-trumpeted “consensus” got wrong. The answer is that two-thirds of the warming predicted by the models is uneducated guesswork. The computer models assume that any warming causes further warming, by various “temperature feedbacks”.

Trouble is, not one of the supposed feedbacks can be established reliably either by measurement or by theory. A growing body of scientists think feedbacks may even be net-negative, countervailing against the tiny direct warming from greenhouse gases rather than arbitrarily multiplying it by three to spin up a scare out of not a lot.

IPeCaC’s official prediction in its First Assessment Report in 1990 was that the world would warm at a rate equivalent to 0.3 Cº/decade, or more than 0.6 Cº by now.

But the real-world, measured outturn was 0.14 Cº/decade, and just 0.3 Cº in the quarter of a century since 1990: less than half of what the “consensus” had over-predicted.

In 2008, the world’s “consensus” climate modelers wrote a paper saying ten years without global warming was to be expected (though their billion-dollar brains had somehow failed to predict it). They added that 15 years or more without global warming would establish a discrepancy between real-world observation and their X-boxes’ predictions. You will find their paper in NOAA’s State of the Climate Report for 2008.

By the modelers’ own criterion, then, HAL has failed its most basic test – trying to predict how much global warming will happen.

Yet Ms. Christina Figurehead, chief executive of the UN Framework Convention on Climate Change, says “centralization” of global governing power (in her hands, natch) is the solution. Solution to what?

And what solution? Even if the world were to warm by 2.2 Cº this century (for IPeCaC will implicitly cut its central estimate from 2.8 Cº in the previous Assessment Report six years ago), it would be at least ten times cheaper and more cost-effective to adapt to warming’s consequences the day after tomorrow than to try to prevent it today.

It is the do-nothing option that is scientifically sound and economically right. And nothing is precisely what 17 previous annual climate yatteramas have done. Zilch. Nada. Zip. Bupkis.

This year’s 18th yadayadathon will be no different. Perhaps it will be the last. In future, Ms. Figurehead, practice what you preach, cut out the carbon footprint from all those travel miles, go virtual, and hold your climate chatternooga chit-chats on FaceTwit.