Greenpeace junkies’ main campaign in India is anti-coal and anti-nuclear and instead promotes renewable energy. But the latter as alternatives have proved a worldwide failure. In an energy starved economy, renewable energy is money down the drain, stifling growth. If economic growth is stifled, it leads to inflation; unemployment; reduced standard of living; poverty; malnourishment and starvation deaths. 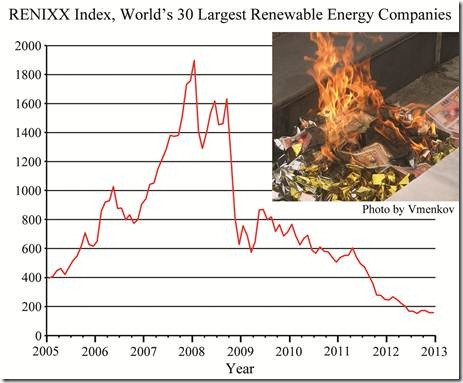 (Steve Goreham inWUWT) Is green energy a fad that has run its course? The investment community seems to think so. RENIXX® World, the Renewable Energy Industrial Index of the world’s top green energy companies, hit an all-time low below 146 on November 21, down more than 90 percent from the December 2007 peak.

The RENIXXindex was established in 2006. It’s composed of the world’s 30 largest renewable energy companies with more than 50 percent of revenues coming from wind, solar, biofuel, or geothermal energy, or the hydropower or fuel cell sector.

The index includes equipment producers, such wind turbine companies Vestas (Denmark), Gamesa (Spain), and Suzlon (India), solar equipment companies such as First Solar (USA), Suntech Power (China), and Sun Power (USA), and also utilities such as Enel Green Power (Italy) and China Longyuan Power Group. Of the 30 companies, 10 are headquartered in China, 10 in Europe, and 7 in the US.

During the heydays of 2007 and 2008, the RENIXX index was on a roll. Former Vice President Al Gore’s book An Inconvenient Truth reached number one on The New York Times best seller list in July, 2006. His documentary movie by the same name became a worldwide hit the same year. In December 2007, Mr. Gore shared the Nobel Peace Prize with the Intergovernmental Panel on Climate Change. The world was whipped into global warming frenzy.

Subsidies and mandates for green energy existed for many years, but during 2006—2008 governments redoubled the emphasis on renewables. California enacted the Global Warming Solutions Act in 2006, establishing greenhouse gas emissions targets and renewable mandates. Illinois, Michigan, and other states passed or strengthened Renewable Portfolio Standards, requiring electrical utilities to buy an increasing percentage of renewables or pay fines. The European Union approved the Climate Action and Renewable Energy package in 2008, requiring increased renewable energy and biofuel use and tighter emissions restrictions.

“He [Al Gore] impressed us all at Deutsche Bank Asset Management. We invited him to an internal meeting in April, 2007 during which we discussed the issue of climate change extensively. A few months later, he received the Nobel Peace Prize for his commitment.

We then created a fund that invests in companies that position themselves as climate-neutral. Within two months almost 10 billion dollars flowed into this fund. Can you imagine? 10 billion! There has never been such an overwhelming success.”

But the subsidy-driven green energy wave soon hit a brick wall of fiscal reality. Spain paid solar operators up to ten times the rate for conventional electricity with a 20-year subsidy guarantee. With a guaranteed annual return of 17 percent, every hombre entered the solar business, making Spain the largest solar cell market in 2008. But the nation’s subsidy obligation soon mounted to $36 billion dollars. In 2009, Spain cut the subsidies and its solar market dropped by 80%.

In Germany, feed-in tariffs of eight times the market rate resulted in the installation of over one million roof-top solar systems by 2010. But the 20-year guarantee also produced a subsidy obligation of over $140 billion. German electricity rates climbed to the second highest in the world and continue to climb to pay for green energy. To stop the bleeding, Germany cut feed-in subsidies three times in 2011 and announced a complete phase-out by 2017. Spain, Germany, Italy, Netherlands, the United Kingdom, the United States, and other nations cut subsidies for wind, solar, and biofuels during the last three years.

At the same time, solar manufacturers built huge capacity to meet expected demand for green energy. But with cuts in subsidies, demand crashed and so did solar cell prices. Dozens of companies went bankrupt, such as German companies Solon and Solar Millennium, and US-based Solyndra.

It’s interesting to note that a single oil company, Exxon Mobil, has a market capitalization of over $400 billion, or about 40 times the capitalization of the RENIXX index of the world’s top 30 renewable companies. It looks like investors are betting on oil and not green energy.

Steve Goreham is Executive Director of the Climate Science Coalition of America and author of the new book The Mad, Mad, Mad World of Climatism: Mankind and Climate Change Mania.

Posted by Rajan Alexander at 10:47 AM