(Ed Caryl in NoTricksZone) So, what should we do about CO2 emissions? The answer is: nothing. The evidence that Co2 is harmful, that it is raising the earth’s temperature dramatically, has been largely fabricated, and at the least, overblown. Surprisingly, when all the facts are in, CO2 is beneficial! It is an essential trace gas, and a fertilizer. The current increase has boosted growth rates of vegetation worldwide by 13 to 15% (see here).

CO2 is used as a supplement in greenhouses. In a closed greenhouse, growth slows or stops if the plants use it up and CO2 drops below 200 ppm as the plants absorb it. CO2 supplement systems are sold to greenhouse farmers to supply supplemental CO2. Levels up to 1000 ppm or more are often used (see here). Extra CO2 also reduces a plant’s need for water by closing the leaf stomata (see here). Leaf stomata are the ports on the lower side of a leaf that lets plants breath.

One of the most important crops in the world is rice. Studies have been done on Co2 enhancing rice production. If CO2 is increased 200 ppm above the current levels, (which have already increased production by the 13 to 15% cited above) production will increase by another 13 to 15% (see here and here).

Here is an illustration of growth over a range of CO2 levels: 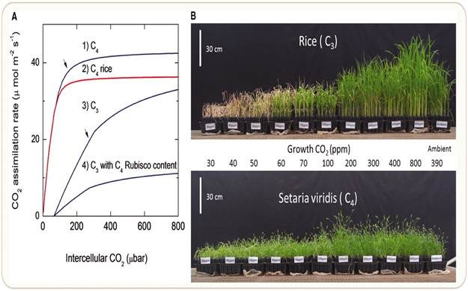 C3 and C4 refers to the chemical pathway used by the chlorophyll in plant leaves to produce sugar. C4 plants include many grasses and corn. It has been argued that C4 plants are immune to changes in CO2, but as you can see in the illustration above, this is clearly not true. They just don’t respond as dramatically as C3 plants. They do, however, become more drought tolerant due to the stomata response reducing water vapor loss.


Plants need 3 major inputs to grow: water, CO2, and nitrogen. From these they produce sugar for energy and proteins and cellulose for structure. Some have argued that increased CO2 produces protein-poor plants. This is true only if increased nitrogen is not supplied along with the increased CO2. A plant needs both in balance. Any greenhouse farmer knows this. But still, this increased growth with increasing CO2 assumes no improvement from fertilization, genetic engineering or plant breeding.


The experiments have been done holding all factors except CO2 constant. That increase from CO2 alone is about 100 million metric tons for each 15% increase in yield per year. That feeds about 700 million more people if one assumes 150 kg of rice per person per year. Imagine the gain if additional fertilizer was supplied along with the increase in CO2. Wheat production with double the current levels of CO2 increased by up to 38 percent (see here). Corn responds to elevated CO2 by needing less water (see here). It is clear that CO2 increases will greatly improve our ability to feed a growing world population.


If we try to limit CO2, we will dramatically limit the economic growth of the world with no effect on the climate. This is already happening in Europe. Taxing CO2 in efforts to limit production of it only makes money for the Al Gore’s of the world. It limits our use of the energy we need for economic growth and the CO2 that our crops need to flourish. Limiting CO2, even if we could, would literally mean the starvation of a billion people in the next 50 years.


What is more important? Feeding and lifting most of the world from poverty orr preventing a questionable slight temperature rise which would lengthen the growing season? The Global Warming crowd is trying to snatch defeat from the jaws of victory.

Posted by Rajan Alexander at 12:56 PM