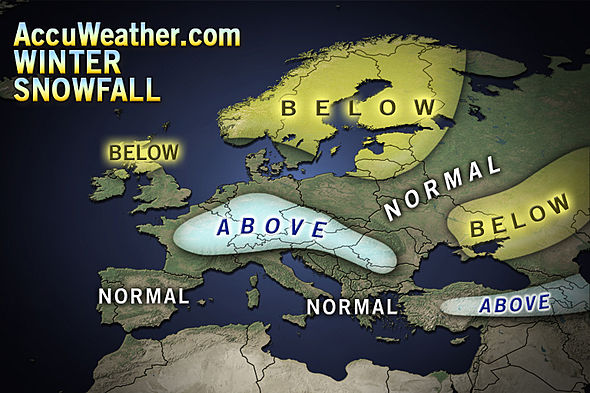 Meteorologists expect Siberian cold to reach portions of western and northern mainland Europe, especially during the middle to latter part of winter. Much of the United Kingdom, Denmark, the Netherlands, Belgium, Poland, Germany, Switzerland, France, Spain and Portugal will have below-normal temperatures for the season.

"January to February will be the best chance for cold air coming out of Siberia,"

However, the cold will not last as long or be as harsh as the deep freeze of last winter, Reppert emphasized. During the second half of January and early February 2012, bitterly cold air originating from Siberia killed hundreds of people across Europe.

Well to the north of the active storm track expected this winter, near- to slightly below-normal precipitation is in store for the U.K., Ireland and Scandinavia.

"London will be mild to start [this winter]. Then it will be turning colder for the end of the winter. That could be there best chance for any snowfall late January and February," Reppert said.

Farther south, a storm train will be in place for much of the winter from southern Spain, the Mediterranean region and southeastern Europe. Above-normal water temperatures of the Mediterranean Sea will help storms to strengthen as they move across the region, enhancing rainfall.

Italy, Greece, former Yugoslavia, Romania, Bulgaria and Turkey are all included in the zone that could receive above-normal precipitation for the winter season. The active winter storms will keep temperatures close to normal for the season in this zone.

The above-normal rainfall predicted from southern Spain to Italy and southeastern Europe will be beneficial for drought-stricken areas. Severe to exceptional drought conditions are gripping portions of Portugal, Spain, Italy and eastern Europe.

The drought impacted agriculture, including a significant hit to grapes that will cause higher wine prices.

One exception to unusual snow occurrences this winter may be the French Riviera.

"The French Riviera is like Jacksonville, Fla. It typically gets snow once every five years or so," AccuWeather.com Expert Senior Meteorologist Jason Nicholls explained. "There might be a cold outbreak in France, especially late in season, during February, for southern areas that may allow snow to fall."

Paris may also receive a snowfall during the latter part of the season.

On the northern edge of the storm train, more snow than usual is forecast in the Pyrenees Mountains, the Alps and Balkan Mountains. With above-normal snow and temperatures that will be cold enough to sustain heavy snow pack, a good ski season is anticipated.

Across Germany, above-normal snowfall is forecast from Frankfurt on south. Berlin may receive near-normal snow.

Posted by Rajan Alexander at 8:17 PM