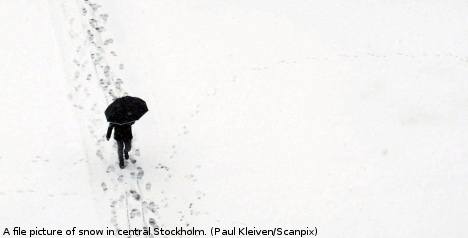 (http://www.thelocal.se) Snow and sub-zero temperatures are on their way toward Sweden's south, according to forecasters who predict Stockholm residents may need to break out their shovels as soon as Wednesday.

The leaves are long gone, and the sun has been a rare sight in many parts of Sweden in recent weeks.

But for those pining for snow to work its magic on Sweden's long, dark nights, the wait is almost over.

According to Swedish meteorological agency SMHI, snow cover may soon extend beyond the mountains in the north to include much of the rest of Sweden.

"It's going to be really cold up north, with temperatures between minus 10 and minus 20 degrees Celsius and there will be snow far down into Götaland,"

SMHI meteorologist Emil Björck told the TT news agency. He explained that a low-pressure system is set to move across the country, bringing with it a mixture of rain and snow across Sweden's midsection.

"By the end of the week, cold air will cover the entire country," he said, adding that "unstable" weather patterns are making life difficult for forecasters. It's hard to say how much snow may fall in different areas."

On Wednesday, heavy snowfall and gusty winds are expected in southern Norrland and into central Sweden, although Stockholm may experience more rain than snow.

However, temperatures in the Swedish capital will dip down below zero by Thursday and remain there for several days, according to SMHI, which predicts another chance for snow in Stockholm next Tuesday after a relatively crisp and clear weekend.

In Malmö in Sweden's far south, temperatures will likely stay just above freezing for most of the week before dipping below zero at the weekend, which will provide a brief break from an otherwise wet and cloudy week of weather in Sweden's south.