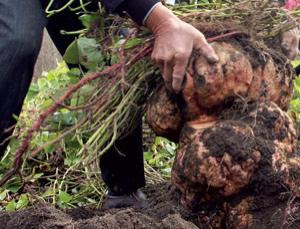 (Scidev) RISING levels of carbon dioxide in the atmosphere may have a silver lining: doubling the size of the sweet potato, the fifth most important food crop in the developing world.

Most studies of the effects of higher atmospheric CO2 on crops have shown rising yields of rice, wheat and soy. The hardy sweet potato is increasingly becoming a staple in Africa and Asia, producing "more edible energy per hectare per day than wheat, rice or cassava", according to research group the International Potato Center.

Hope Jahren at the University of Hawaii at Manao and colleagues grew the plants at four CO2 concentrations: the current level of 390 parts per million, as well as 760, 1140 and 1520 ppm. The Intergovernmental Panel on Climate Change predicts that atmospheric CO2 levels will be between 500 and 1000 ppm by the year 2100.

For the least extreme scenario at 760 ppm, the team found the tubers grew up to 96 per cent larger.

Posted by Rajan Alexander at 10:31 PM