US Chief negotiator snubs NGOs: Should remember that it costs us to bring them to conferences 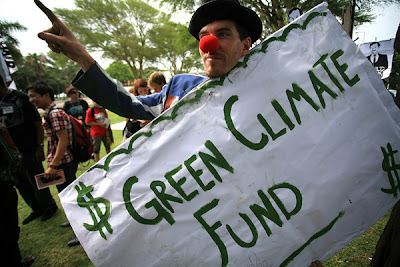 (Economic Times) The US chief negotiator for climate change Jonathan Pershing has reminded the international green NGOs at Doha that it pays to bring them to these conferences.

He said so in a closed door meeting with the NGO representatives suggesting that they should remember who pays for their presence. TOI accessed the conversation recordings done secretly.

"We are one of the funders to make it possible for you to be at the table. I hope you recognize that many of you who come to the meetings you do, the US fights for you at every chance to give you a chance to be in this room," he said.

In what is being considering rather patronizing by those who have heard the conversation, the US said.

"What we also think is the participation of a lot of countries out there includes the ones that disagree with us."

The US has come in under scathing comments by civil society recently from the developed and the developing countries for neither putting up the funds nor increasing their emission reduction targets even after President Obama in his victory speech recently said that he had not done enough in his first term to address climate change.

Pershing suggested that the NGOs shift focus away from demanding greater commitment from the developed world to reduce emissions. He said,

"I am struck in some fashion that the news that a lot of your attention and a lot of global attention isn't on the actual implementation. The question that people are excited by is what's the new commitment - the next new thing."

The global civil society plays a crucial role in the climate change negotiations especially mobilizing public pressure to force countries to do more. Though the civil society remains often divided on how much the rich countries or the emerging economies need to do, at the Doha meeting the EU and the US have come under tremendous criticism for neither putting up more money nor increasing their emission reduction pledges which right now stand lower than that of the developing countries.

Pershing had earlier publicly stated that the US would not increase its commitment between now and 2020 and the EU has offered to do it only if developing world first makes a yet larger commitment to fighting climate change.

Posted by Rajan Alexander at 9:54 PM