Oxfam shockingly tells the world that their only agenda in COP 18, Doha is money


Doha, Tim Gore, Oxfam's Climate Adviser shamelessly tells the world that the prime priority of Oxfam is the Green Climate Fund, when operational, will have Oxfam as a primary beneficiary. So the bottomline of Oxfam’s hysteria about climate boils down to money!  The argument that Gore uses is totally specious warning that if there is no money developing countries (probably a euphemism for Oxfam) will fall of the "climate finance cliff".

Oxfam International is running in the red which is increasing every year due to its bloated size and high salaries of its staff.  How do they want to resolve their deficit? Taxing global citizens while they continue to stay bloated and paying their staff even higher salaries and perquisites!! This is perversion. 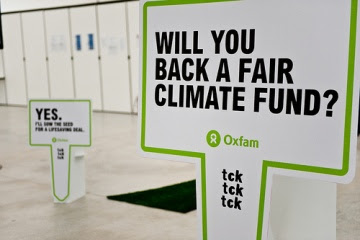 The aid agency also said much of the first 30 billion US dollar (£19bn) tranche of funding given to poor countries to develop cleanly and deal with the impacts of climate change was not new money, or was delivered as loans they had to pay back.

In chaotic United Nations climate talks in 2009, developed countries pledged that 100 billion US dollars a year (£63bn) would be channelled to poor nations by 2020 to reduce their emissions and help them adapt to climate change.

They also pledged 30 billion US dollars (£19bn) as "fast start finance" to help poor countries over three years to 2012.

But ahead of the latest round of UN climate talks in Doha, Qatar, this week, Oxfam warned the fast start finance period is ending and the Green Climate Fund set up to channel the billions of pounds needed in the coming years is empty.

The charity has raised fears that funding to help poor communities will be scaled down, just when it needs to be scaled up in the face of more extreme weather.

New research published by Oxfam on the fast start finance also suggests that the money did not meet promises made in Copenhagen that it would be "new and additional".

According to the research, only a third (33%) of the money was new, with the rest previously announced before the 2009 conference, and less than a quarter (24%) was in addition to existing aid promises.

And only a fifth (21%) was earmarked for projects that helped poor communities adapt to climate change, such as providing farmers with drought-tolerant seeds or irrigation schemes, with the remainder going on programmes which cut emissions such as building renewables.

Oxfam believes those kind of projects are more likely to attract private investment, and public money such as the fast start finance should go more towards helping communities cope with the impacts of climate change.

The report found the EU had delivered almost all of its promised 10 billion US dollars over three years, but only 32% went towards adaptation, and only 27% was new money.

Oxfam highlighted the notable behaviour of Ireland. which it said delivered 100% of its contribution as grants, nearly all for adaptation and at least a portion that is truly additional to existing development commitments.

Developed countries have yet to make any concrete financial commitments for the period 2013 to 2020, after the fast start finance finishes at the end of this year.

Oxfam is calling on countries attending this year's UN climate talks to work with urgency and ambition to increase climate finance, particularly in the face of extreme weather events such as the drought in the US and Russia which has pushed wheat prices to record highs and left families in poor countries going hungry.

"Developing countries are heading towards the edge of a 'climate finance cliff' without any certainty about how they will be supported to adapt to climate change after 2012 draws to a close.

There is a real danger that climate finance will be scaled down in 2013, at a time when it needs to be scaled up."

Posted by Rajan Alexander at 8:00 PM