COP18 Day 2: The Elephant in the room is Shale Gas 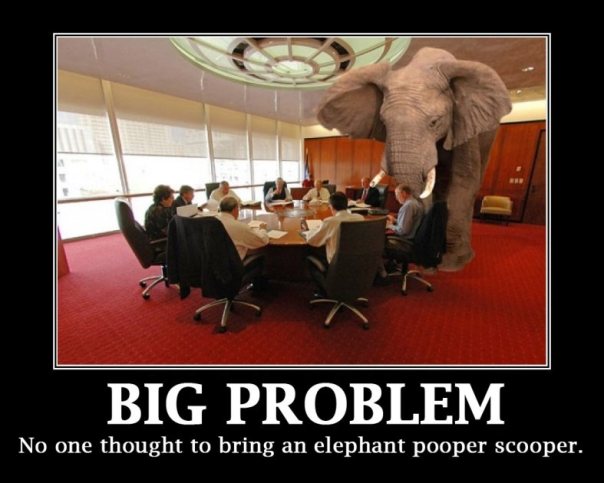 (Tory Aardvark) There is one giant fracking elephant in the COP18 room, Shale Gas, and the statement by the COP18 President earlier this month that Shale Gas was good for the world.

The first day of COP18 ended with a climate of paranoia, mistrust and suspicion, Day 2 is seeing the mistrust of the host nation continuing to grow.

The problem is that no one seems to know where the Qataris actually stand on the de-carbonisation aims of the conference, Qatar is a massive producer of natural gas, their deputy Prime Minster Al-Attiyah is an enthusiastic supporter of Shale Gas and President of COP18, but their satellite news channel Al Jazeera has been pumping out Al Gore style Climate Reality fear stories in the run up to COP18.

"The tension and anxiety of the early days of the UN climate change negotiations in Doha could be eased if the hosts made a pledge to reduce emissions, according to Wael Hmaidan, director of the Climate Action Network International...

Qatar is not only the host, but also holds the Presidency of the COP18 talks, giving it power over how the negotiations proceed.

However, with no history of strong environmental commitments and no pledge made through the UN to cuts its own emissions, Hmaidan said the talks are suffering, with delegates unsure of Qatar’s motives."

Is that really the problem or are the Green NGOs still smarting from the failed Rio+20 Earth Summit where for the first in decades Greenpeace, WWF, FoE et al found out the hard way that when your  boondoggle is no longer politically fashionable,  your political influence drops off exponentially.

"CAN and other groups are also concerned with their input to the negotiations with interventions from NGO groups during the talks limited to just 30 seconds. Hmaidan since this is just symbolic of a wider problem in Doha."

That will be the continuing loss of political influence by the Green NGOs then.

Then there is the fundmental problem that worries the COP18 delegates does anyone in Qatar actually believe in the religion of Anthropogenic Global Warming?

"The concern we have is that there is not a lot of transparency from the Presidency about what their strategy is. We feel we have a lot to add, but this lack of clarity on where the talks are going makes us fear there will be no process to contribute what we want...

The summit will not work if they continue like this. Talking to every country and Party to the talks, there is a lot of anxiety. They don’t know where the President wants to go and they don’t even know where Qatar stands on climate change,” said Hmaidan."

Must be time for the Greens to mention Shale Gas again:

Al Attiyah has drawn criticism for his links to the fossil fuel industry. In the build-up to the talks he also praised shale gas, a source of controversy among many environmentalists, and has pushed gas powered electricity as a long term emissions reduction strategy.

When COP18 fails to achieve anything concrete or binding the blame will be placed firmly upon the host nation and Shale Gas, and then the UN Climate Circus will stumble on to COP19 and their next failure.