First Day COP18, Doha: US lifts Climate Skeptics spirits by putting a spanner in the wheel of negotiations 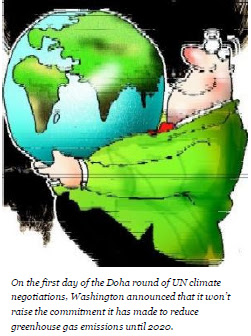 (Times of India): Forget the US President Barak Obama's statement on climate change upon his re-election stating, "We haven't done as much as we need to". On the first day of the Doha round of UN climate negotiations, Washington announced that it won't raise the commitment it has made to reduce greenhouse gas emissions until 2020.

"I don't anticipate the United States will in the pre-2020 timeframe modify the commitment we have made,"

said Jonathan Pershing, the US' deputy special envoy for climate change. This effectively sealed the chance of the US increasing its paltry commitments of reducing emissions by 17% below 2005 levels within another eight years.

The small island countries and some other nations have been demanding a rise in the appetite countries have so far shown to reduce emissions between now and 2020. The European Union (EU) has committed to reduce emissions by 20% below 1990 levels by 2020 under the Kyoto Protocol. The US, which has refused to be part of the Kyoto Protocol, has committed what some studies say ranges between 0% and 3% reduction of carbon footprints, when compared to 1990, the base year.

Developing countries, including India and China have made voluntary pledges too, which studies show add up to more than what the rich countries have offered.

But as UNEP and other expert panels have warned these pledges aren't enough to keep the planet from hitting runaway climate change as global temperatures rise by more than 2 degrees Celsius over pre-industrial era causing irreversible damage. The small island and least developed countries, who are some of the most vulnerable nations, have asked that countries raised the bar even before the new global deal is negotiated between now and 2015 — to be operationalized by 2020.

India and other large developing economies have noted that — with the EU unwilling to increase its emission pledges under the Kyoto Protocol and other developing countries abandoning the Kyoto ship — the demand by the small island states would only increase the burden of poor economies to reduce emissions.

The US on Monday locked down any hope of an increase in emission by stating that at Durban last year countries had decided to negotiate only a post-2020 deal, and not increase emission pledges anytime before that.

"At Doha here we will sketch out the next steps in the process for developing this new (post-2020) agreement. We gave ourselves a careful remit at Durban...our task is not to renegotiate that mandate but to implement it," Pershing said.

Posted by Rajan Alexander at 11:35 PM