Joe Bastardi: Was It Global Warming When Stronger Hurricanes Hit the East Coast in the 1950s?


(Joe Bastardi in The Patriot Post) It is frustrating to be out in front of the hurricane threat on the U.S. Coast, and then have people who either have not looked, or have, and are simply ignoring the facts, come in after the fact and make their claims. I have referred to these people as weather "voyeurs." They only look when it suits their purpose. In the private sector, our fight is every day, and the knowledge of the past and the reasons for the weather and climate are the foundations for any success in the future.

A good meteorologist has to know his weather and climate history or he will fall prey to the whims of the computer models. Perhaps you saw some of that with Hurricane Sandy. Until the middle of the week before the storm, the U.S. generated model was taking the storm out to sea and there was denial in some circles that Sandy was going to come back and hit the coast.

Of course, the usual suspects piled on the disaster train once it became obvious, to push their AGW agenda. They are nowhere to be found before the fact, but certainly come out of the woodwork after. I leave the reader to judge the tree by the fruit on it. 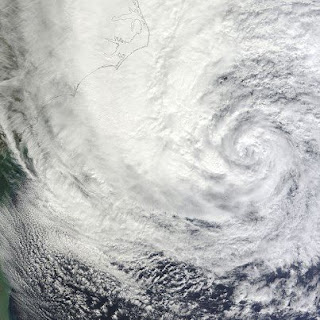 Here are a few reminders that will assure you that a storm like Sandy is well within the realm of what nature can, and in reality, should do, especially given the cycle we are in, which is very similar to the 1950s (cooling Pacific, with a still warm Atlantic). This cycle was forecasted years ago by Dr William Gray from Colorado State, and for my money, he was spot on.

As with many visionaries, he was scoffed at, and what is particularly galling is now that it is happening, people pushing AGW try to discredit him. But his generation of meteorologist that did not rely on computers had a keen sense of the past and actual weather rather than the virtual reality type forecasting that seems to be in vogue today. Example: Look at the ride the climate models have taken us on. Their forecast for warming has obviously gone astray as seen here.

You have seen the chart many times, but it does not get old, nor does the fact change that the earth is no longer warming, but CO2 is going up. That chart should be enough to debunk the AGW idea on hurricanes since if the earth is not warming, it can't be warming that is causing more hurricane hits. The other problem is that there are not more hurricane hits -- the total global tropical activity is down! The Global ACE index (accumulated cyclonic energy) which gives us an objective way at looking at total global tropical cyclone activity, has tailed off to record low levels.

So we have two objective measurements saying that:

a.) The earth is no longer warming.
b.) Tropical activity is not getting worse.

Interestingly enough, as if to teach a lesson to the Nobel Committee, the tropical activity started tailing off most strongly after Al Gore was awarded a Nobel prize for his movie "An Inconvenient Truth." The actual Truth is the opposite (which is inconvenient, though apparently largely ignored by Al Gore.)

But the irony grows even richer when one considers the fact that hurricane hits on the U.S. Coast were greatest when there was less CO2!

Now, if I wanted to demagogue this in the spirit of some of the AGW advocates, I could say, "Look, more CO2 drives down hurricane hits!" But I know there is no proof of that. But I also know that given the actual facts, it's certainly not leading to more hits!

Finally, the cycle we have entered is one that should lead to more storms hitting the East Coast. This happened in the 1950s -- the Pacific cooled, the Atlantic was in its warm cycle, and the resultant climate pattern lead to drought and heat over much of the nation in the summer, and increased hurricane hits on the East Coast. The facts are clear: The 1950s had a road map of destruction up the East Coast, not 2 in 2 years (by the way, neither Irene or Sandy were major hurricanes by the 1950's standards, so one can say we still are not close to where we were. Sandy was a major hurricane on my power scale, which I am trying to replace the Saffir Simpson Scale with ... another story for another time.) But this map speaks for itself.

By the way, the destruction of Sandy, as bad as it was, is not the "ultimate" storm by any means for the Northeast, the same way Katrina was not the "ultimate" storm for New Orleans. While not wishing to bore you with the details, in my hurricane talks I cover the tracks of storms that would cause the most damage to the various areas of the coast that have been hit over the past 20 years (again we have been lucky compared to the 1940s and 1950s.) If you are interested in this, I do give talks on this and please feel free to contact the Weatherbell.com office on it. The more people I can get my message out to, the more I can do to counter the distortions that are out there.

In the end, blaming Sandy on Global Warming or "Climate Change" is, as I put it on the O'Reilly Factor, shockingly ignorant or shockingly deceptive. The facts are clear on this and not hard to see, if one simply looks!