(Here’s the  latest article of my pal, Tom Harris, Executive Director of International Climate Science Coalition (ICSC) and a Research Fellow to the Frontier Centre for Public Policy in Winnipeg, Manitoba, Canada - enjoy) 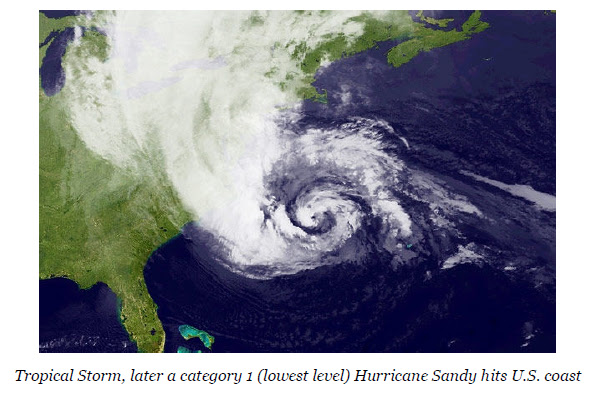 (Frontier Centre of Public Policy) November 14, 2012, 20:30 pm EST:  The first segment of former Vice-President Al Gore’s “24 Hours of Reality: The Dirty Weather Report” has just completed. Gore and his guests connected Hurricane Sandy and other tropical cyclones with global warming caused by human-induced greenhouse gas emissions (“carbon pollution”, they wrongly called carbon dioxide). Besides the fact that such a connection is impossible since there has been no overall global warming in 16 years, the concept is also wrong in principle.

“There has been an approximately 12-fold increase in humanity’s coastal infrastructure around the world in the past 100 years, so it is to be expected that damage from extreme weather events would also rise. However, this does not indicate an increase in either the frequency or intensity of the actual events and specifically I am referring to hurricanes on the globe.

In fact, as can be seen at http://tinyurl.com/7ze2neo, many of the global hurricane parameter records were set decades in the past and show little sign of increasing overall at present. For example, http://policlimate.com/tropical/global_running_ace.png shows that we are near a 20 year low in the intensity of tropical cyclones worldwide.”

Contrary to the assertions of NASA’s James Hansen and Gore, it is unlikely that global warming, if it starts up again, will cause increased extreme weather. ICSC and FCPP advisor Dr. Tim Ball, an environmental consultant and former climatology professor at the University of Winnipeg, explains that if the world warms due to increasing greenhouse gas emissions, temperatures at high latitudes are forecast to rise most, reducing the difference between arctic and tropical temperatures. Since this differential drives weather, we should see weaker midlatitude cyclones in a warmer world and so less extremes in weather.

It is also a mistake to blame human activities for current weather extremes:

“…the data reveal there have not been any significant warming-induced increases in extreme weather events.”

The report showed that this was the case whether the phenomenon was precipitation, floods, drought, storms, hurricanes, fire, or other weather-related events. NIPCC author, Dr. Madhav Khandekar, demonstrated that extreme weather events are now occurring with about the same frequency as they did during 1945-1977 cooling period.

The NIPCC shows that the United Nations Intergovernmental Panel on Climate Change has ignored or misinterpreted much of the research that challenges the need for carbon dioxide and other greenhouse gas controls. In other words, the science being relied upon by Al Gore, and governments worldwide to create multi-billion dollar climate and energy policies, is almost certainly wrong.

To see if extreme weather is really on the rise in the U.S., we must consult the National Climatic Data Center. We find that almost all records were set many decades ago. Check it our yourself at http://www.ncdc.noaa.gov/extremes/scec/records.

Instead of vainly trying to stop extreme weather from happening, we obviously need to harden our societies to these inevitable events by burying electrical cables underground, reinforcing buildings and other infrastructure and ensuring reliable energy sources so that we have the power to heat and cool our dwellings as needed.

There is an evolving climate crisis, however:

In the October 27, 2011 report (see here) of the San Francisco-based Climate Policy Initiative, it was shown that, worldwide, at least $97 billion per year is being provided to “climate finance”. Tragically, just $4.4 billion—about 5%—of the total is going to help countries and communities adapt to climate change. So, 95% of the finance is devoted to the possibility of controlling global climate decades in the future.

When I spoke with African delegates at the Copenhagen Climate Conference in 2009, they were angry that developed countries seemed to place more value on people yet to be born than those suffering now. Even if it were possible to control climate, and increasingly more scientists say it is not, it is irrational to concentrate more on what might someday happen than on helping vulnerable people adapt to climate change today.

We must invest our limited resources wisely, focusing on problems we know to be real and that we can help remedy.

For example, we know, with 100% certainty, that poor people and poor nations are affected by climate change today. According to the United Nations, one million children are at risk of starvation right now largely because of the drought in the Sahel region of East Africa. Yet, the UN have not been able to meet their fund raising targets to help save these people. But billions of dollars still flow into climate mitigation.