Reuters: University of East Anglia researcher(s) write that the UN should limit the number of delegates at annual climate [hoax] meetings?

This is a direct snub to NGOs like Greenpeace; Oxfam; ActionAid; ChristianAid and all the NGOs that constitute the so called comic Climate Justice movements. These jokers have been campaigning to make air travel expensive for global citizens but each year they attend COP meetings in tens of thousands and go through their routine providing entertainment by attiring in fancy dresses and marching through the streets beating drums and other musical instruments. Many of these comedians are science illiterates; leave alone any formal training in climatology!

Now a climatologist has suggested that their participation be limited. But he also propounded a dangerous formulation suggesting that they do away with the consensus principle and adopt majority voting to break the stalemate. This is dangerous. Why India should for example be forced to accept decision imposed by the majority of the nations? That will be a surrender to national sovereignty. 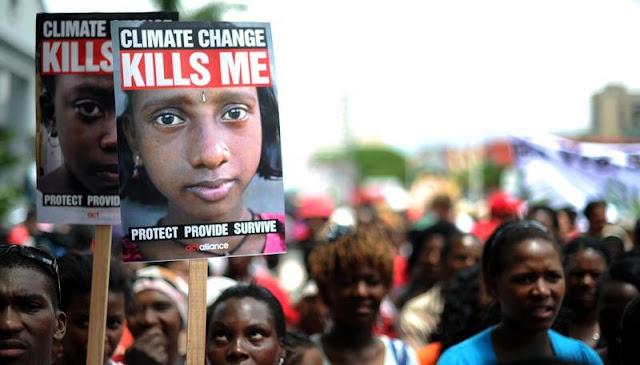 Nations working on a deal to fight climate change should cap the size of delegations and use majority voting to overhaul negotiating rules that stifle progress and harm the interests of the poorest nations, researchers said on Sunday.

Almost 200 nations will meet in Doha, Qatar, from November 26 to December 7 to try to extend the Kyoto Protocol, the existing plan for curbing greenhouse gas emissions by developed nations that runs to the end of 2012.

They have been trying off and on since Kyoto was agreed in 1997 to widen limits on emissions but have been unable to find a formula acceptable to both rich and poor nations.

The number of national delegates hit a peak of 10,591 at the Copenhagen summit in 2009, when governments failed to agree a global accord to slow climate change after opposition from a handful of countries, up from 757 at a first meeting in 1995

Limiting the delegates per country would be a step towards greater fairness, the researchers from the University of East Anglia, the University of Colorado and PricewaterhouseCoopers wrote in the journal Nature Climate Change.

Brazil holds the record, with almost 600 delegates at Copenhagen, while many of the poorest nations cannot afford to send more than a handful of delegates and so have less influence on the negotiations, they said.

Many studies show that developing nations, most dependent on agriculture, are most at risk from a changing climate.

"There is negotiation by exhaustion," Heike Schroeder, lead author at the University of East Anglia in England, told Reuters. Small delegations were unable to follow multiple strands of negotiations that often last late into the night.

The researchers also suggested that a shift to majority voting could help unlock progress at talks where decisions on slowing global warming now have to be made by consensus.

Still, many countries oppose majority voting since it would curb their influence over decisions for limiting emissions that could cost trillions of dollars in the coming decades. Decisions without the backing of top emitters would lack legitimacy.

"Majority voting would be a threat to some," Schroeder said. "But our parliaments don't work (with consensus), why not extend that to the realm of multilateral negotiations?"

The Doha delegates will review progress towards a global deal to slow climate change, such as more floods, droughts, heatwaves and rising sea levels. The deal is meant to be reached by the end of 2015 and enter into force in 2020.

However, delegations already have conflicting and changing expectations of the talks.

China, the biggest emitter of greenhouse gases ahead of the United States, has shifted to put more emphasis on foreign affairs and less on economics. The United States has moved to increase participation by members of Congress.

Britain has moved to put more stress on energy while developing nations such as Bhutan or Gabon, for instance, were consistent in focusing on environment, forestry and agriculture.

Posted by Rajan Alexander at 11:36 AM