IPCC should drop its big reports, and have smaller ones as sceptics more likely to miss the errors!!! 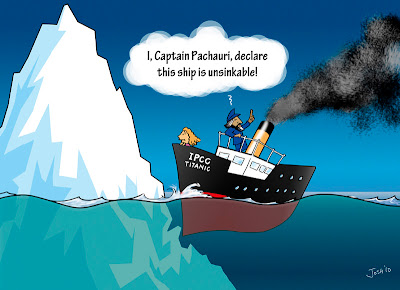 [Scidev.net] The Intergovernmental Panel on Climate Change (IPCC) should stop publishing broad scientific assessments of the state and the implications of global warming every five or six years, and concentrate on producing smaller, more focused reports, a meeting in Oxford was told last week.

Some of those involved in the IPCC review process, due to be completed in 2014, suggested that such a move would increase the practical value of the intergovernmental panel for policymakers. For example, it would help to highlight uncertainties in climate change predictions without undermining discussions about issues on which there is broad scientific agreement.

It could also avoid damage caused by public controversy over the detailed but relatively limited content of the reports, such as the furore created three years ago by data over the rate of the melting of Indian glaciers.

Myles Allen, head of the Climate Dynamics Group at the University of Oxford, United Kingdom, and a lead author and reviewer on previous IPCC assessments, said that as a result of criticisms of earlier reports

"IPCC statements are becoming so legalistic that their value as a communication tool is diminishing".

"We should give up on the 'Stalinist' notion of a single information vehicle," Allen told the meeting, organised by the Reuters Institute for the Study of Journalism, part of the Department of Politics and International Relations at Oxford.

Allen suggested that the IPCC process was partly motivated by a desire "to make a big media splash," as a way of getting key messages through to policymakers.

But this could backfire when it came to conveying the uncertainties contained in climate change predictions.

"The whole IPCC enterprise of coming up with a way of communicating that cannot be misunderstood is falling apart," said Allen.

"The main function [of IPCC reports] at the moment is to provide a focus for sceptics," he added. If the misleading data about the Indian glaciers had been in a regional report, “it would have made only a small impact."

He was supported by Arthur Peterson, chief scientist at the Netherlands Environmental Assessment Agency and a member of the Dutch delegation to IPCC meetings. Peterson said that the intergovernmental panel "is not really up to the task of effective communication about the risks and uncertainties of climate change".

Rather than the IPCC assessments being described as a "scientific consensus" on the state of climate change, it would be better if they were described as "policy-related assessments that acknowledge uncertainty," said Peterson.

He added that the Dutch government had launched a website — Climate Dialogue — to provide a forum for scientists to discuss openly the main points of disagreement by asking for views on specific topics related to climate change, rather than trying to reach a broad consensus.

But Roger Street, technical director of UKCIP [previously UK Climate Impact Programme] pointed out that, whatever criticisms were made of the IPCC reports in their current form, they remain important for developing countries, many of whose leading decision-makers rely on them for information about the current state of global warming.

Jonathan Lynn, head of communications for the IPCC, points out that it is up to the 195 member government of the intergovernmental panel to decide on the type of reports it should produce, and that it already publishes reports on specific topics, in addition to its synthesis reports.

The fifth IPCC assessment is due to be completed in 2013/14. The fourth assessment was published in 2007.

Posted by Rajan Alexander at 7:53 PM