India to defend its rights at Doha Climate talks 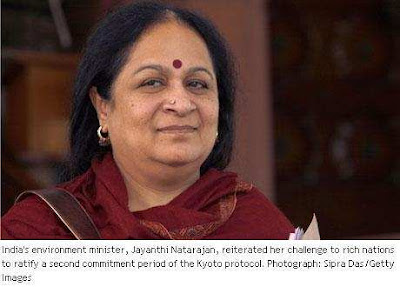 (Times of India) The Indian negotiating team in Doha will not be looking to score any big victories at the climate negotiations starting on Monday but to ensure that it does not lose ground. Unlike the previous annual UN climate talks, in Qatar, environment minister Jayanthi Natarajan is tasked to defend the battle lines India drew at Durban last year and earlier.

With the developed world losing its appetite to either make a greater contribution to reducing its emissions or to transfer funds to the developing world, for countries like India, the Doha round of talks is set to be a battle of attrition. India would be asked to pay yet again for a bargain it made with the developed world at Durban talks - starting talks for a new post-2020 deal in return for the rich countries keeping Kyoto Protocol alive beyond 2012.

The primary risk at the talks would be to India's agriculture and its farmers. At Doha, the 194 countries will gather to decide if and how short-lived emissions of methane from rice-fields can be controlled. Methane, when released in the atmosphere, heats it up but it remains, like several other 'short-lived gases' in the atmosphere, for a little while before disintegrating.

The developed countries will push that the world first address these short-lived gases that predominantly come from the developing world, instead of addressing the more trenchant carbon dioxide emissions from burning fossil fuels.

A large push is also expected to come asking India and other developing countries to increase their voluntary pledges of reducing emissions.

India has already committed 20-25% reduction below 2005 levels of energy intensity of the economy by 2020. Along with other developing countries like China, these voluntary pledges add up to more action than what the rich world has so far promised. Yet, a strong attempt will be made to get India and other poor countries to do more. An enhancement of pledge could shave off a substantial bit from the country's economy, Indian government's early estimates have shown.

The Doha talks will also see an attempt to whittle down the existing principles of the UN Framework Convention on Climate Change in the negotiations over a new global deal which is to be finalized by 2015 and operationalised by 2020. The EU is keen to delay its existing commitment to operationalise Kyoto Protocol beyond 2012 and link it to how the basic elements of the new global compact are shaped.

Doha will see if the emerging economies, along with other like-minded countries, can counter EU and push for an unconditional operationalisation of Kyoto Protocol, which requires them to make a paltry reduction in their emissions over the next few years.

The EU and other developed countries will try to chip away at the existing firewall between obligations of the developed world and the poor nations in the talks over the new deal. There will be a strong attempt to de-link the commitment from the rich over transfer of finances and technologies to the global ambition for reducing emissions between now and 2020 and in the new post-2020 deal.

So little is expected of the developed world that even a line in US President Barack Obama's victory speech admitting to the need to address climate change is been seen as a great leap for mankind. Despite Obama's one-off admission, the US has not indicated any change to its minimalist pledges.

Unless the US comes out of its recalcitrance or the EU actually becomes a 'green leader' instead of merely selling itself so, Doha is set to become a run to the bottom. In it, India's challenge will be to ensure it does not cede ground it had fought hard for last year at Durban.

1. Will the level of cuts undertaken by the rich world to reduce greenhouse gas emissions be increased or would developing world be forced to take more burden

2. Will India have to undertake new targets to reduce emissions from agriculture and other specific sectors

3. Will India have to give in more to get EU to operationalize Kyoto Protocol

4. Will Obama-2 bring any commitment on finance or emission reduction from US

5. Will the new post-2020 global treaty be based on equity

6. Will the rich world force the world to trash existing discussions on finance, technology, unilateral measures and other issues of the developing world.

Country lines: How some of the key countries and groups are placed at Doha

* EU -- In no mood to increase its low target to reduce emissions under Kyoto Protocol. Want the elements for the new global deal and a timetable to be ready before it ratifies Kyoto Protocol 2.

* Small Island states (AOSIS) and Least Developed States (LDC) - Want to increase the emission reduction levels even before 2020. Not bothered about the firewall between developed and developing world. Want money.

* US - Wants to shift onus on developing world by asking for cuts in short-lived gases like methane from agriculture and refrigerant gases. Silent on its own meager commitments

* India - No increase in existing voluntary targets. Equity and other principles to remain intact. End to unilateral trade measures by rich world.

* China - Wants the firewall intact between rich and poor world. Wants West to do more to cut emissions.

Posted by Rajan Alexander at 9:38 AM