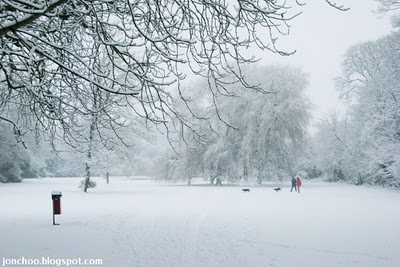 (Daily Star) Britain is set for a “nightmare” end to 2012, which has been colder than every year bar one since the mid-1990s.
The Met Office said a big freeze will hit within three weeks, sparking fears of transport chaos.

The Daily Star Sunday revealed last month that the Met Office was briefing the Government and road chiefs to prepare for colder than average temperatures until the end of January.

They have forecast winter’s first big freeze at the end of November, as ­temperatures plunge “well below average”. Ice and frost are expected to cause ­transport problems, with heavy snow a major risk.

Nights will be sub-zero and days will be anchored close to freezing.

Late-November cold spells can cause ­chaos, as happened in 2010 when a -14C chill dumped 16in of snow in the North and 8in in the South-East – kick-starting the year’s record-breaking, month-long pre-Christmas freeze.

Transports chiefs throughout the ­country have pledged to battle the freeze with a record three million-tonne grit ­mountain and thousands of council staff clearing snow and ice near schools and shops.

A Department for Transport spokesman said: “A great deal of work has been done across the transport sector preparing for winter.”

This year we have already had a -16C ­February freeze, farmers were ravaged by drought before the ­wettest summer for 100 years and the early winter brought snow to England five times in nine days up to last weekend.

This year’s UK mean temperature is 8.78C, based on January-October data and average temperatures for November and December.

The Met Office says below-average ­temperatures are forecast for November and December, meaning 2012’s final overall temperature is expected to be lower than 8.78C.

Posted by Rajan Alexander at 8:38 PM