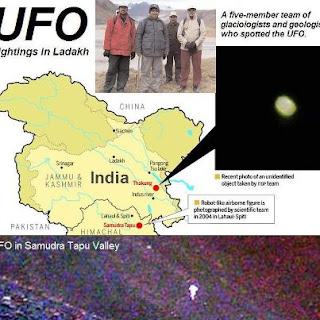 (http://www.agoracosmopolitan.com) Kashmir known for its breath-taking scenic beauty, high peak round the year snow clad inaccessible mountains, prior to the advent of superiority and control in air-power, provided security from intending marauding invaders. History tells us that mighty Mogul Emperor Akbar due to difficult mountain terrain and valour displayed by Kashmiris was defeated nine times repulsing all his invasions. Himalayan and Karakoram Range has always had historical links with Kashmir as this difficult mountain terrain was used by ruthless tribal warriors like Mongols, Jutha, Khokh to commit loot and plunder; Kashmir due to raiders’ strange physical appearance and enclosed protected cultural environment perceived these invading tribes as aliens.

Indian Express reports that UFO sightings skyrocket across Kashmir (Nov 05, 2012) as its army sources have claimed the sightings of more than 100 UFO’s in the last three months. Reports suggested that the yellowish spheres appear to lift off from the horizon on the Chinese side and slowly traverse the sky for three to five hours before disappearing. It was also confirmed by army sources that these shining objects were not Chinese drones or satellites but detected to be non-metallic. Indian army, it appeared, showed great concern that the inability to identify the objects could prove to be highly advanced Chinese surveillance equipment.

UFO sightings in Kashmir, reported earlier, made revealing observations. The interesting phenomena that came to the fore were an isolated reporting of UFO’s in the area sourced to reports again from Indian army circles. In the recent past, on Sep 22, 2012 a carnivorous great African lizard like creature (believed to be a Komodo dragon) was spotted on the outskirts of Kashmir’s capital Srinagar. The department of Wild Life laid a hunt for the creature and said it moved around during the night and were hopeful to trap it. However, after a vigorous unsuccessful hunt the creature vanished in thin air and has not been seen again.

The claim by Indian army witnessing tens of UFO sightings gives credence to a serious threat to world peace at large and particularly to the area around. It is also claimed that these alien objects could be surveillance equipment required for some military adventure especially when most of the sighting, as presumed, originate from Chinese controlled areas. Since India and Pakistan are not scientifically or technologically advanced as compared to China, any UFO sightings from its area would be a far-fetched idea unless the real UFO’s make their way towards Siachen area control by two enemy nations. As a matter of fact, the existence of clandestine UFO basis wherefrom sorties could be made to surprise humans every now and then is a great possibility. The locals in Kashmir many a times reported having seen strange luminous objects flying across the skies during night at great speed and vanish in a matter few seconds.

Guardian UK reported (April 7, 2012); Siachen Glacier avalanche that buried 150 Pakistani soldiers alive is considered mysterious as the armies of India and Pakistan have stayed in those harsh conditions for years on and nothing untoward has happened to take note of. Kashmir region at 22,000ft is divided between two hostile nuclear powers and the area is known as the world’s highest battlefield.

Russian TV reported Pakistan’s Bhoja Airlines crash, killing 127 people on board, was caused by UFO (April 20, 2012). Though officially it was stated that jet’s fuel tank exploded in mid-air due to a thunderstorm, the TV report claimed that "ancient earth was blasted by barrage of asteroids up to 25 miles wide and they delivered ingredients for life to our planet". Since fateful plane’s flight data recording system, key to any investigation, have been recovered, the cause of the crash was still being investigated and the options looked into were bad weather conditions, lightning, and fault in the aircraft or any other mysterious factor responsible for the mishap.

The Sydney Morning Herald reported (August 6, 2012) the discovery of a secret tunnel running underneath India-Pakistan cease-fire line in Kashmir. The authorities on both sides still don’t know who built it and surprisingly the tunnels exit point, as reported, has not been found. The locals on both sides of ceasefire-line refused to believe this to be a human work but contrarily something abnormal. The spike in the espionage activity on both sides cannot be ruled out but again the ignorance shown by warring factions put a lid on the controversy and the case was hushed up. The initial inflamed tensions between the countries were downplayed and ignored as nothing concrete was found to blame Pakistan for any kind of mischief.

In a latest development, the inability to find the source of these unidentified shining objects Indian army came up with a solution to the problem by saying that these UFO’s were nothing but Chinese lanterns. (Reports Times of India; Nov.11, 2012)

However, the army sources did not elaborate on the premise or explain the purpose of these, non-metallic flying lanterns on the horizon. Initially, an army suggestion was turned down that one of these flying objects needed to be shot down by the heat-seeking weaponry and it was thought that the move could trigger tension in the region to revive hostilities. It is apprehended that the ‘geographical area’ an internationally accepted trouble spot having a hallmark of triggering world war III, if ignored, would lead to catastrophic consequences.

UFO presence is not unknown to Kashmir and since times immemorial a good number of stories are afloat about UFO’s making an impact on the lives of local population. Kashmiris generally believe that some extra-terrestrial activities are present in the area especially towards uninhabited snowbound mountainous range yet unvisited by humans.

Posted by Rajan Alexander at 7:52 PM