Background Paper to Doha: Climateers in for their COP

Globe-trotting promoters of the world’s biggest scam meet in Qatar next week. There will be more fear-mongering, hand-wringing, and head-shaking - but no hand-cuffs. Delegates will be allowed to come and go freely without fear of arrest for inciting public alarm for financial gain, their mission impossible. 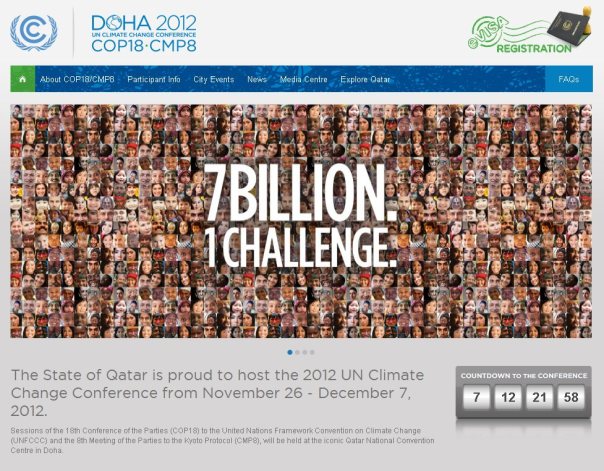 (Michael Kile in The Quadrant) Changes in nature used to be blamed on gods, demons and witches. Today’s weather worriers, however, attribute them to a new deity – “dangerous anthropogenic climate change” (DACC) – a being allegedly created by greenhouse gas emissions, primarily from the developed world.

When the United Nations Framework Convention on Climate Change (UNFCCC) holds its eighteenth annual meeting, a two-week Conference of the Parties (COP18) – which includes the 8th session of Parties to the Kyoto Protocol – at the Doha National Convention Centre, delegates will again “declare war” on DACC with all the moralising fervour of a priestly elite reciting a religious mantra, as they have done for nearly two decades. More alarmist speculation will be rolled out and promoted as “settled science”.

Remember Yvo de Boer, the UN climate chief during the 2009 Copenhagen COP-15 talks? Now with KPMG, he recently warned that scientists working on the Intergovernmental Panel on Climate Change’s Fifth Assessment Report [due to be published in late 2013 and early 2014] had told him their findings would be shocking:

"That report is going to scare the wits out of everyone.” He was “confident” it would create “new political momentum”.

“It's indicative he’s moved to KPMG [as Special Global Advisor, Climate Change and Sustainability]. The AGW/CO2 scam has involved the business sector to an incredibly large extent, so why not? With all that lovely taxpayer money on offer; with artificial markets created purely by legislation rather than need, where traders can create vast yet non-productive "profits" (in a zero- or negative-sum game), the private commercial sector is just as implicated in [carbon] plundering [as the UN].”

Remember COP-17 in Durban a year ago? One journalist described the mood as “very strange, I have to say. It’s a festival, a conference and a workshop all rolled into one. There are diplomats and activists, secretary-generals and European royalty, musicians and dancers, and people dressed as trees. There’s a lot of finger pointing, a lot of finger waving.” Another observer said it resembled a

“big alternative lifestyle expo” with “earth mother” vibes.There we were told: “Many people here in the developing world are angry. They see the changing climate, the rains coming at different times, the crops failing, and they are absolutely furious.”

They will be angrier still next week; and even keener to get their hands on the proposed UN $100 billion Green Climate Fund. But

“don’t call it a fund. It is reparations, reparations for a wrong that’s been done to us by you, the developed world. You made a mess here. You’re going to have to clean it up!’” 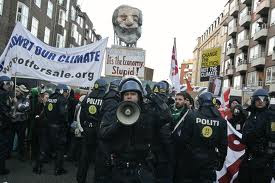 Somewhere in the UN behemoth there are experts on “stable” climate - magicians or eco-shamans who know it secrets - and how to conjure this fantasy realm into existence. Where are you? How will you deliver your atmospheric Garden of Eden, a state of nature that will be eternally just right for the planet’s 7,000 million-plus inhabitants? How will you guarantee rain will always come everywhere exactly on time; that crops everywhere never fail, that climate change will be forever optimum and beneficial for everyone?

As for climate reparations , this core – and impressively vague - UN concept is based on the harm assumed to be caused by past anthropogenic carbon dioxide emissions. The lives of the “climate vulnerable” will be improved through direct programs, policies and mechanisms. It naturally will involve “significant resource [money] transfers” to ensure the vulnerable can “cope adequately with future climate challenges”; presumably decreed by these magicians.

The UN climate bureaucracy - expanding at an even faster rate than GHG emissions – will ensure the biggest Magic Pudding ever created by the political classes is sliced up fairly – and, bien sur, free from corruption.

Not surprisingly, the developing world continues to push this dubious quest very hard:

‘We want the money for adaptation, for living with climate change. We have to live with it because you failed to stop it. No deep [AGHG emissions] cut now means mass carbon genocide in the least developed countries, and the possible extinction of small island states,”

“the whole aim of practical politics is to keep the populace alarmed -- and hence clamorous to be led to safety -- by menacing it with an endless series of hobgoblins, all of them imaginary.”

God’s wrath, or the Devil’s mischief, won’t work for you? Try instead speculation about “plausible world futures” (aka “probabilistic temperature projections”, “hypothetical scenarios” and “storylines”). Hobgoblins like a “nonlinearly evolving cascade of risks” (page 60) and claims about

“the increasing likelihood of threshold crossing and tipping points being reached or breached” in the next half-century are sure to scare the gullible masses.

“All our work, all our thinking, is designed with the threat of a four-degree Centigrade world in mind”, wrote President Jim Yong Kim. “Such a world can, and must, be avoided.”

“It is my hope that this report shocks us into action. Even for those of us already committed to fighting climate change, I hope it causes us to work with much more urgency.”

Despite being “well aware of the uncertainty that surrounds these scenarios”,

the Bank did not discard them as alarmist fictions, but felt they were

After all, it had positioned itself as a leading advocate for ambitious action on climate change. It saw not only a “moral imperative” here; but somehow it all made “good economic sense”. (Imagine missing out on all that “climate financing”, “green growth and “climate smart development”.)

The ABC's Radio National also went for shock treatment with this segment: World Bank warns of four-degree temperature rise. PM’s Mark Colvin told listeners that “one of the economic world's most conservative agencies has joined what it calls an "unprecedented consensus" among scientists, to warn that climate change is on course for catastrophic levels this century. The World Bank today issued its assessment of global warming, and it's devastating. The bank president warns that 'time is very, very short' to address a crisis that he believes could see the planet warm by four degrees by the 2060s.”

What they were not told, however, was this assessment was not prepared by the bank. While there were “contributions from a wide range of experts across the globe”, it was commissioned, prepared and written for the bank by one of the EU’s most activist research groups - the Potsdam Institute for Climate Impact Research and Climate Analytics.

The Bank, of course, does “not guarantee the accuracy of the data”. The report’s “findings, interpretations and conclusions” do not “necessarily reflect the views of” the Bank, its Board or the governments they represent.”

For a local expert response, PM’s Tim Palmer (curiously) asked lawyer John Connor from a privately-funded activist group – one that claims to be “unencumbered by vested interests” yet has 10.5 per cent of its funding sourced from the Australian government - the Climate Institute. Would the World Bank's status spark more urgency from businesses and policymakers?

Palmer: The study says there's a 20% likelihood of a four degree rise by the end of the century; even if all current pledges from countries are fulfilled, and that it's likely to hit three degrees. So what kind of effects are we likely to see from, let's assume a three degree rise.

Connor: This is the head of the World Bank, an extremely conservative agency speaking very clearly about the risks that are involved on our current pathways that the world is heading towards in terms of climate change, and talking vividly about the need to shock people and governments into much stronger action.

The biggest shock for COP-18 delegates, however, could come from an unexpected source. According to EurActiv, the US could propose transferring core elements of the Doha Summit to the Major Economies Forum (MEF), a platform of the world’s largest carbon dioxide emitters, reducing the UNFCCC to a forum for discussing, monitoring, reporting and “verifying” emissions reduction projects.

Should the US do so, it would be “provocative”, potentially splitting the world into “rival climate blocks led by Washington and Beijing”.

“The one and only place where formal negotiations and, above all, decisions take place and where treaties are negotiated is the UNFCCC,” stressed Christiana Figueres, UNFCCC’s secretary-general.

Nevertheless, something has to change – and soon, as Yvo de Boer suggested at a recent event:

“We are in a process that has gone downhill at a pace that is absolutely stunning, and the very appropriate question to ask at this time is what we do about it.”

“We’re in a situation where the mandate is extremely unclear, and that creates endless opportunities to confuse, to move the goalposts and to procrastinate,” he said.

“Are we aiming for a target of 2°C or do we want to aim for 1.5°C? Do we need targets, and to whom should they apply? Do we need to set new goals or revise existing ones? Do we need a legally binding treaty, or something in international law?”

The Durban agreement called for a process to develop a protocol, another legal instrument or a legal outcome. In a three-page 1,026 word media release, the 194-party COP-17 conference agreed to develop and to “adopt a universal legal agreement on climate change as soon as possible, but not later than 2015.” It (hopefully) would “come into affect by no later than 2020”. A new Ad Hoc Working Group on the Durban Platform for Enhanced Action would begin talks immediately.

For many, however, what was agreed was merely a voluntary deal whose implementation has been put off for a decade. Others saw it as little more than an announcement to keep talking to avoid collapse of the two-decade process. As de Boer warned, “it could and would be interpreted by Parties in a variety of ways with the intention of slowing decision-making” to an even slower crawl.

Posted by Rajan Alexander at 7:22 PM