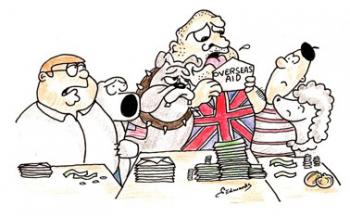 (Daily Bhaskhar) After repors from United Kingdom that its government was planning to cut aid to India by half, 'furious' Indian government has rejected all aid from the UK.

Sources said that Indian authorities were annoyed and upset over UK's haggling and all British aid to India will close by 2015.

Britain is set to unveil plans this week to slash its 280 million pounds per annum aid to India by half, amid criticism that its overseas assistance was not justified at a time of cut backs at home, a media report said on Monday.

Greening, who is due to visit India shortly, will outline how the payments could be reduced amid claims that India is too rich to need handouts.

Quoting sources, Sunday Telegraph reported that Greening may cut the subsidies by up to half.

The move comes amid mounting criticism that Britain's overseas aid programme, which is set to reach more than 12 billion pounds by 2014, cannot be justified at a time of spending cuts back home.

However, the Daily Mail on Monday reported that Greening will merely divert money sent to India to poorer countries, not cut the overall aid budget.

Britain sends about 280 million pounds per annum to India even though the country has its own space programme and its leaders claim it does not need the cash from the UK.

The rapidly industrializing country, whose economy is ranked tenth in the world on one measure, recently earmarked 52 million pounds to send a probe to Mars.

The Daily Mail has also revealed how the UK spent tens of millions of pounds on an army of consultants to tell India how to spend the cash.

The department for international development has defended the subsidies, saying India is still home to a third of the world's poor who survive on less than 80 pence a day.

Greening, a former accountant who only took on the international aid brief only two months ago, revealed last month that she was in talks with India over turning off the aid tap.

"We should recognise that as countries get richer, we need to be responsible about how we transition in our relationship with them from aid to trade."

"Those are the discussions that I am having with the Indian government at the moment," she said.

Greening also promised a "new approach" to ensure every pound of British aid spent around the world had the "biggest impact".

Although she has backed David Cameron's controversial pledge to increase UK overseas aid to 0.7 per cent of the nation's GDP, the former transport minister was portrayed as sceptical of the initiative when she was appointed international development secretary last month.

Posted by Rajan Alexander at 2:50 AM