UN climate chief: The next IPCC Climate Report is being written in a way to scare the world to sign a global climate treaty!!


Obviously they lack the scientific data or else they would be already screaming through the roof the world is coming to an end unless we need to act now!!!

Data or no data, they announce that despite this they are going to write a report that is designed to scare people and governments to sign a global climate treaty.

Need any more proof that global warming is not science but a political agenda? 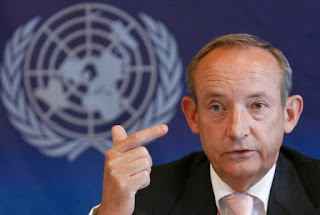 (http://www.brisbanetimes.com.au) THE next United Nations climate report will ''scare the wits out of everyone'' and should provide the impetus needed for the world to finally sign an agreement to tackle global warming, the former head of the UN negotiations said.

Yvo de Boer, the UN climate chief during the 2009 Copenhagen climate change talks, said his conversations with scientists working on the next report of the Intergovernmental Panel on Climate Change suggested the findings would be shocking.

"That report is going to scare the wits out of everyone,'' Mr de Boer said in the only scheduled interview of his visit to Australia.”I'm confident those scientific findings will create new political momentum.''

The IPCC's fifth assessment report is due to be published in late 2013 and early 2014.

Before then is the next end-of-year UN climate meeting in Doha, Qatar. Delegates will discuss a second commitment period for the Kyoto Protocol, the only legally binding accord to cut greenhouse gas emissions.

Last December nations agreed in South Africa to work on a binding agreement that would cover all countries. That work is expected to continue until 2015.

Mr de Boer, who is now special global advisor on climate change for KPMG, said the best prospect may be for nations to settle on targets that they write into their national laws, rather than a binding international deal.

The latter would be "almost impossible to get through the US Senate", he said, no matter whether incumbent Barack Obama or challenger Mitt Romney wins the US presidential election.

'Slipped between our fingers'

Three years on from Copenhagen, Mr de Boer said he has neither nightmares nor withdrawal symptoms from those failed talks, which included a final 12-hour marathon of discussions behind closed doors with Mr Obama, former Australian prime minister Kevin Rudd and 23 other global leaders.

"That was such a fantastic opportunity and it slipped between our fingers," said Mr de Boer. "That's my big frustration."

"Most politicians will think twice about going to a climate event, and if they go again, they will be damned sure that they'll be celebrating success rather than be associated with failure,'' he said.

Expectations of global action on climate change have diminished, but Mr de Boer said it would still be "a very, very difficult conference" for his successor, Christiana Figueres.

He said the mandate for 2015 remained ambiguous and nations would be reluctant to sign up before they know what they were getting into.

The Kyoto Protocol has not been ratified by the US, and Canada, Japan and Russia have said they would not sign up to a second round when the current commitment lapses at the end of the year. Australia is yet to announce whether it will commit. Developing nations are holding back until they can see the rich acting.

They also want proof the UN's Green Climate Fund - aimed at supporting efforts to counter climate change  - will get the $US100 billion in government and private funding promised.

He said superstorm Sandy may spur more Americans, and people elsewhere, to consider the risks of climate change, but warned:

"It's a bit like being shocked into stopping smoking when you've been told you've got terminal cancer."

Posted by Rajan Alexander at 8:56 AM