Doha COP18: BASIC Countries prepare to conflict with US 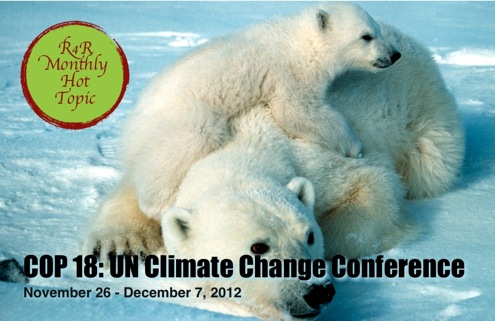 China, India, South Africa and Brazil said a climate agreement expected to take effect in 2020 won’t be a “new regime,” potentially setting up a confrontation with the U.S., which is seeking to eliminate a firewall in negotiations between developed and developing nations.

The four countries are reining in expectations for the Durban Platform, according to a statement released following a meeting of the so-called bloc in Beijing. Delegates at United Nations treaty talks in the South African city agreed in December that nations will hammer out a new deal to fight climate change by 2015 and implement it five years later

The statement may set up a conflict with the U.S. at two weeks of UN climate talks that start next week in Doha, Qatar. The U.S. has said any climate deals must treat nations equally, a shift from the Kyoto Protocol that has separate terms for developed and developing countries.

“The Durban Platform is by no means a process to negotiate a new regime, nor to renegotiate, rewrite or reinterpret the convention and its principles and provisions,” the countries said, referring to the UN Framework Convention on Climate Change. The outcome of the discussions are governed by “in particular the principles of equity.”

At last year’s discussions, the U.S. opposed inclusion of the concept of “equity” in the Durban mandate because lead envoy Todd Stern said it could be used to perpetuate a “firewall” that assigned developed countries binding emissions targets under the Kyoto Protocol, while setting no enforceable greenhouse-gas goals for big developing countries such as India and China.

On a conference call with reporters that followed the Durban talks, Stern was asked whether he’d said “if equity’s in, we’re out,” in the final discussions that crafted the mandate.

“I might have, but that’s certainly the idea,” Stern said in the Dec. 13 teleconference.

“We just thought that that would be a distraction that would tend to drive people back into the old paradigm and we didn’t want to go there,” Stern said. The “key element” of a new deal is “to include all the major players in the same legal system kind of together,” he said.

China and the U.S. in July agreed that greater climate- protection efforts are needed before a binding global treaty comes into force in 2020, joining nations at a meeting in Germany to acknowledge that current pledges fall short.
Greenhouse Gas Record

The UN’s World Meteorological Organization said yesterday that concentrations in the atmosphere of the three main heat- trapping gases, carbon dioxide, methane and nitrous oxide, rose to a record. The International Energy Agency said earlier this month that rising concentrations of the gases threaten to render impossible the UN goal of containing the temperature rise since industrialization to 2 degrees Celsius (3.6 degrees Fahrenheit).

Agreeing to a second round of emissions reduction targets for parties to the Kyoto Protocol that will be implemented from January is the “key deliverable” from Doha, the  countries said.

“Developed countries should take the lead and scale up ambition” for emissions-slashing and climate aid efforts between now and 2020.

The U.S. never ratified Kyoto, so it isn’t subject to its targets, while Japan, Canada and New Zealand have all said they won’t take part in a second round of commitments. That leaves the 27-nation European Union and Australia as the main countries seeking new targets. Russia has indicated it may not take on new targets, though has yet to fully spell out its stance.

“The original idea when negotiating the climate change convention is developed nations will take the lead in reducing their emissions and in providing the resources for developing nations to change their economy that will be necessary for their efforts,” Brazilian envoy Andre Correa do Lago told reporters. “This is not happening.”

Posted by Rajan Alexander at 6:41 PM