Nature Journal: Little change in global drought over the past 60 years 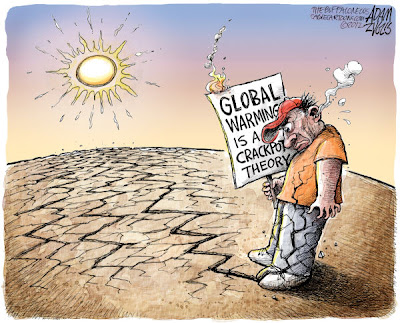 Drought is expected to increase in frequency and severity in the future as a result of climate change, mainly as a consequence of decreases in regional precipitation but also because of increasing evaporation driven by global warming. Previous assessments of historic changes in drought over the late twentieth and early twenty-first centuries indicate that this may already be happening globally. In particular, calculations of the Palmer Drought Severity Index (PDSI) show a decrease in moisture globally since the 1970s with a commensurate increase in the area in drought that is attributed, in part, to global warming.

The simplicity of the PDSI, which is calculated from a simple water-balance model forced by monthly precipitation and temperature data, makes it an attractive tool in large-scale drought assessments, but may give biased results in the context of climate change. Here we show that the previously reported increase in global drought is overestimated because the PDSI uses a simplified model of potential evaporation that responds only to changes in temperature and thus responds incorrectly to global warming in recent decades.

More realistic calculations, based on the underlying physical principles that take into account changes in available energy, humidity and wind speed, suggest that there has been little change in drought over the past 60 years. The results have implications for how we interpret the impact of global warming on the hydrological cycle and its extremes, and may help to explain why palaeoclimate drought reconstructions based on tree-ring data diverge from the PDSI-based drought record in recent years.

Posted by Rajan Alexander at 11:11 AM