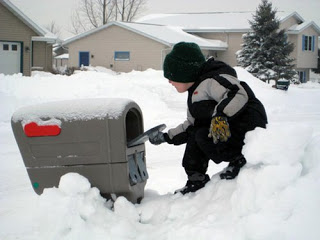 (http://hockeyschtick.blogspot.in) A new paper published in Nature Geoscience examines climate change over the past 11,500 years and finds, contrary to the claims of climate alarmists, that the highest storm activity is associated with cold periods. According to the authors,

"We find that high storm activity occurred periodically with a frequency of about 1,500 years, closely related to cold and windy periods." The paper adds to several others showing that global warming decreases storm activity and extreme weather.

Considerable climatic variability on decadal to millennial timescales has been documented for the past 11,500 years of interglacial climate. This variability has been particularly pronounced at a frequency of about 1,500 years, with repeated cold intervals in the North Atlantic However, there is growing evidence that these oscillations originate from a cluster of different spectral signaturs, ranging from a 2,500-year cycle throughout the period to a 1,000-year cycle during the earliest millennia. Here we present a reappraisal of high-energy estuarine and coastal sedimentary records from the southern coast of the English Channel, and report evidence for five distinct periods during the Holocene when storminess was enhanced during the past 6,500 years.

We find that high storm activity occurred periodically with a frequency of about 1,500 years, closely related to cold and windy periods diagnosed earlier. We show that millennial-scale storm extremes in northern Europe are phase-locked with the period of internal ocean variability in the North Atlantic of about 1,500 years. However, no consistent correlation emerges between spectral maxima in records of storminess and solar irradiation. We conclude that solar activity changes are unlikely to be a primary forcing mechanism of millennial-scale variability in storminess.

Posted by Rajan Alexander at 11:34 AM