The UK Express: Coldest Winter in 100 Years On Way for Britain

Britain will grind to a halt within weeks as the most savage freeze for a century begins. 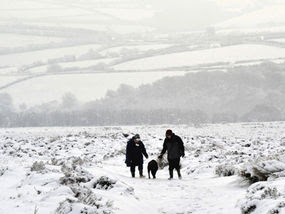 Temperatures will fall as low as minus 20C in rural areas, forecasters warned last night, while heavy snow and “potentially dangerous” blizzards will close roads and cripple rail networks.

“We are looking at some of the coldest and snowiest conditions in at least 100 years. This is most likely to occur in the December to January period with the potential for widespread major snowfall across the country.

Parts of the North, Scotland and eastern England are likely to experience a run of well below average temperatures, which will include some potentially dangerous blizzard conditions at times.”

He warned the South faces a bout of “unusually heavy snowfall” in December.

Leon Brown, meteorologist for The Weather Channel, said snow could arrive as early as next weekend, with temperatures falling to minus 5C in the North.

“There is a 30 per cent risk of some snow over lower levels in Scotland on Friday.”

But before the big freeze arrives the problem will be torrential rain and strong winds gusting up to 80mph. The Met Office last night issued severe weather warnings for heavy rain in parts of the North-west on Monday and Tuesday.

“Low pressure is going to bring rain and some strong gusts to parts of the country on Sunday night and into Monday. It is going to be a very unsettled week after that with bursts of rain and strong gusts throughout. Apart from Sunday, the weather will be very changeable so that is when to make the most of it.”

“The ground is already saturated from the wet summer, so flooding is a definite risk next week.” He said the worst of the big freeze would hit in January and February when winter delivers a sting in the tail.

“We are looking at January and early February for winter to really bare its teeth. Extreme low temperatures in rural areas, especially in the North where minus 20C is not unlikely, with the possibility of significant snow events.”

Temperatures topped 61F (16C) in England, while parts of Scotland enjoyed their warmest November day since 2001. Just a day earlier Aboyne in Aberdeenshire shivered in minus 6.1C.

Posted by Rajan Alexander at 4:11 PM