Feeling Cold already? Winter to kick in after a week and then the cold really begins: IMD 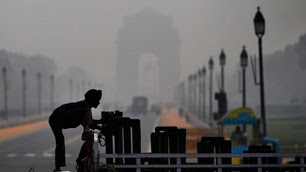 (Times of India) If the nip in the air has made you impatient to flaunt your woollens, you still have to wait a week or more, says the Met.

By then, the temperature should drop 3 to 4 degrees below normal and the north winds should start blowing in, according to the weather office. The process has started and there are no low-pressure troughs in sight that could hinder the onset of winter.  In fact, the mercury's downward slide started about two weeks back.

"In Kolkata, winter usually starts setting in towards the end of November. So, we are approaching winter and the signals are clear. The mercury has dropped steadily. But we must wait another week or so for winter to set in,"

said Devendra Pradhan, the deputy director of meteorology.  It could take at least three more weeks for winter to reach its peak.

"The maximum temperature in peak winter hovers around 18 to 19 degrees while the minimum is around 12-13. It could drop further depending on the prevailing weather conditions. But that is unlikely to happen before December-end or early January. That is when the chilly northerly winds start blowing in from the snow-clad Himalayas. Snowfall in the Himalayas is therefore an important factor," said Pradhan.

The fall in temperature has been gradual and normal, according to the Met office.

"So far, there's no indication of a delayed winter unless, of course, a low pressure zone intervenes," said a weather official.

Whenever such a zone takes shape over the Bay of Bengal, the cool northerly wind gets obstructed. The resulting water-vapour pushes the humidity up, leading to a warm spell.

On Wednesday, the maximum temperature in Kolkata was 29.7°C while the minimum was 21.7°C.

Posted by Rajan Alexander at 8:27 AM